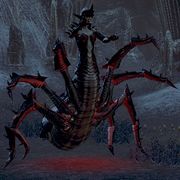 At one point of fight boss will retreat to centre of room and climb up to celling and your screen will turn dark (like slow-mo, adds in room will also kind of slow down). When you see this happening STOP MOVING. Seriously, stop moving and stand still. You can heal, you can put on shield, you can use skills that wont move you an inch and you can res people that are nearby but you have to stand still. A green tiny aoe circle will appear under your feet. You have to stay still inside it.

It will take some time, like 2-4 seconds of standing still (it feels weird, i know) but then your screen will turn normal and what you should be looking for is the moment that tiny green circle that was under your feet fades out. THIS IS THE MOMENT. You have to dodger roll once and then immediately dodge roll again. If you do it successfully you will see that you avoided a central spike attack and then AOE that is around spike.

Pay attention to group-mates, don't roll/don't walk into them because your spike will kill them (vet Crypt of hearts pre final boss flashback).

The second way to do it is more mag users friendly since it requires just one roll or sprint. You stand still, then your screens returns to normal and green circle disappears from under your feets this is where you start walking. Not sprting, not rolling, just walking. After taking 2-3 steps you will see a ground rumble below your feet, clouds of dust, this is when you roll. One dodge roll should get you out of spike AOE that will come up exactly where you noticed the ground rumble/dust cloud.

Catacombs are kind of a mini maze that is shaped like a hourglass with boss room in the center point. Players will be divided into groups of two. One group in top other in bottom. Goal is to come back to boss room and stay alive.

Things that you will encounter in maze: hoarvors that will zerg you if you stay too long in one place, nightblade daedras that will stun you and snare you, spike trap pads that will snare and damage you, savage argonian that will help you killing one of daedra adds.

Now why did you need atro light for? The light/dark rule applies here and atro light... well lights up your path and will also reveal on which trap pads you can stand and which to avoid (they will be red).

Its generally advised to let the tank + dps team come out first, boss hits like a truck... Also it WILL happen that healer team will be late so EVERY member should have some self heals. Vigor for stamina, offbar resto for magicka with ward etc.

Things helpful in maze: rapids to remove snares and move faster, anything that can stun enemies like dragonknight's claws, caltrops, mines. Self heals are necessary for group that does not have healer. Also its good if the person that carries the light wont abandon other group member behind lol (it happens so often when light carriers is stam based and can CC break all the time and sprint while person behind is magicka squishy light armor).

Unconfirmed but my friend kept raging about it. He would say: hoarvors gain speed each time you attack them or they will catch up with you and touch you. Trying to snare them, throw caltrops or attack them would lead to wipe. Same goes for turning around and running close to them (and being attacked). I personally did not notice anything like that.

I also noticed during the Don't Move Phase, you can successfully avoid the spike aoe if you roll out as soon as you see a dirt cloud under your feet. Saves you from having to use up stamina rolling more than once.